Two weeks ago, Meeting C++ 2018 started. The first attendees got their badges and it was again this time of year for my staff, the volunteers and myself: conference time.

And we had a great time, the conference ran smoothly and was over all to soon. Time flys when you're an organizer, it keeps you busy, until suddenly its done and the event is over...

... so thank you to everyone who contributed to this event: Speakers, Staff & Volunteers, the Hotel and last but not least all the wounderful attendees. A good impression on what Meeting C++ 2018 was like are the trip reports and the images will give you an impression on how it was to be there.

This year had 3 great keynotes, with Andrei Alexandrescu, Lisa Lippincott and Nicolai Josuttis. 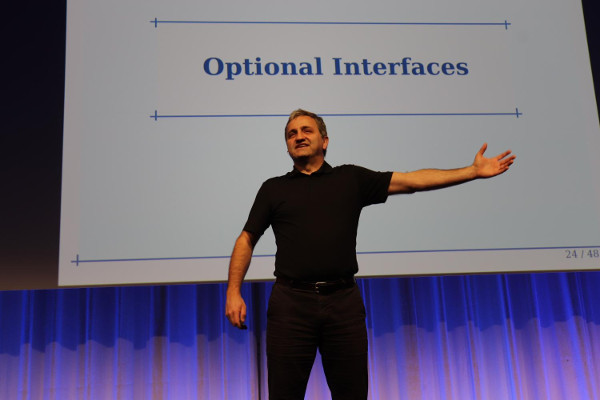 Andrei Alexandrescu opened the conference with his thoughts on introspection and how if constexpr is a bad copy of static if. He is a great entertainer and speaker, so his keynote felt very natural. But also had lots of points to think about as a C++ dev, and if the committee gets it always right? And what about this "other language", which he kept hinting at. 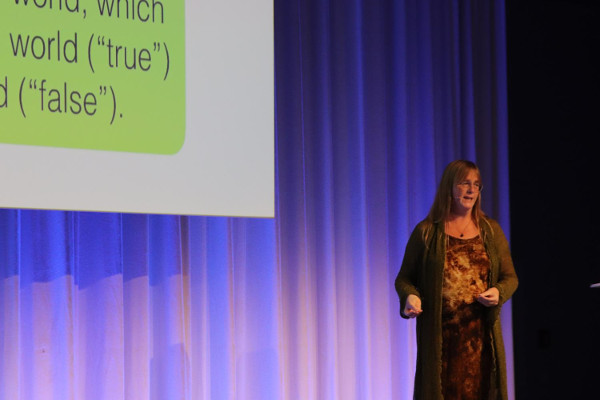 Lisa Lippincott did open the second day with a keynote that gave a different perspective on computing and the logic that applies to it. When I invited Lisa, I knew that this would be a keynote to think about, something not everyone would understand and find access to directly. But its a hint at how to understand code from the mathematical view and gives a great new perspective. 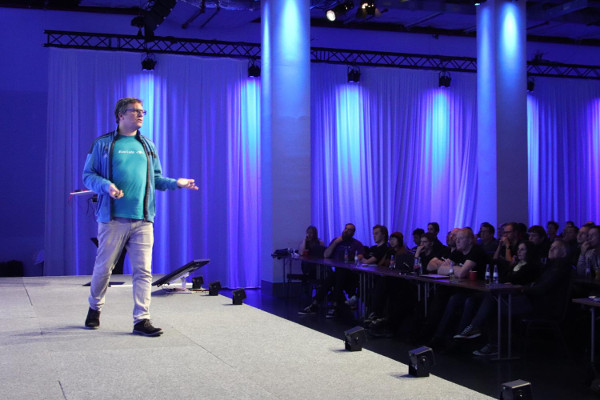 Nicolai Josuttis gave the closing keynote this year. He is the first german keynote speaker since Hartmut Kaiser in 2014. And it was great, in 3 parts he showed the flaws and details in C++. It was a very honest keynote, he threw lots of shade on C++. Not everyone seemed to agree with his chosen keynote title "50 shades of C++", and the keynote did have quite a lot of tension and cliff hangers where you thought, what will come next? So Meeting C++ 2018 closed with a dramatic keynote showing the rough spots of C++.

Meeting C++ always features great talks, and with a track for new speakers, its also bringing new folks to the conference with new views. I'm looking forward to taking a look at the talks later while doing the video work. For now all I can say the feedback send to speakers was good, with some hints on how to improve. Unfortunately I did not get to see a talk this year, as organizing and taking pictures kept me busy. But at least I did get to see a few talks while taking pictures... 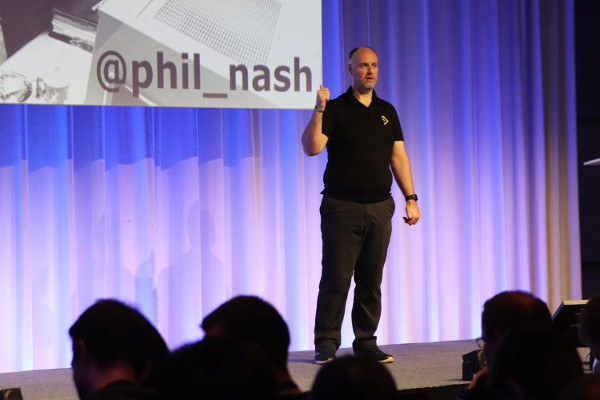 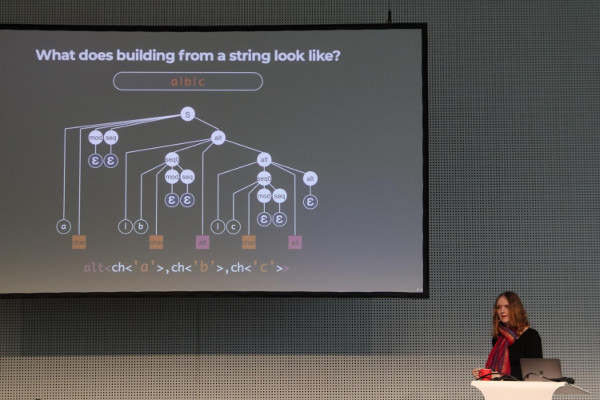 On the first evening the Quiz is the last highlight of the day. Its being organized by Diego and sponsored by Conan for a few years now. Thanks you Diego & Conan! The quiz seemed to be harder this year then in the last, but again it was a great mix of fun and the horrors of C++. Each code quiz generated an output, which each group had to write down in order to gain a point for the round. There were 10 code quizzes. One of the things I wanted to do this year, is to capture the quiz and its atmosphere in pictures. Its so hard to describe or to imagine, when you've never been to it. And so I got the best picture of this years conference, which is taken during the quiz: 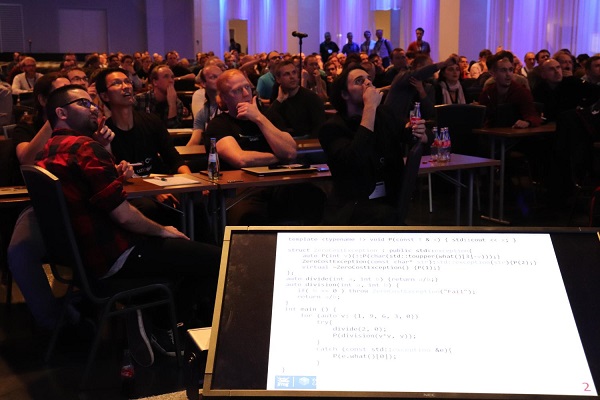 Lightning Talks have been around for a while at Meeting C++. But for the last years they always had to compete with the other talks. Still it was a very successful format, and it might return like that to the conference. But with no plans for the second evening, finally there was a good spot to place the lightning talks, so that everyone could see them. It was a great success, also the lightning talks will be the first videos to be released. 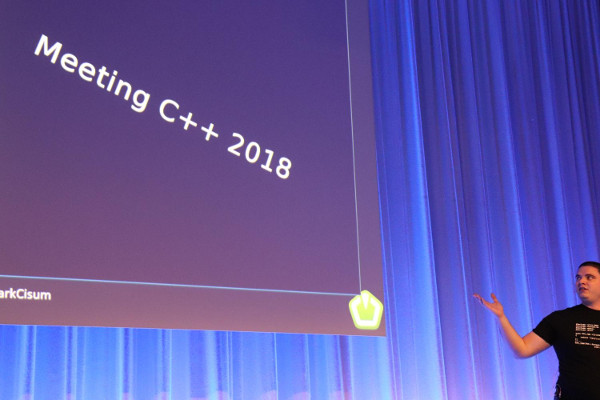 But, there was also a 5th track this year, the lounge track. This used to start in the breaks the last two years ago, but last year most of the debates went on for a full talk. So making it an official track gave it more space to be filled with meetups and more space in the schedule to be visible to attendees. I attended a few of the meetups, and its always great to see how folks exchange on certain topics freely without any plans or directions.

Starts with the Staff & Volunteers on stage, thanks for your help!

For a few years now I do a short update (Just 90 minutes ;)) on whats new with Meeting C++, but also what Meeting C++ does beyond the conference. As there is always enough new folks around that I'd like to introduce to the greater C++ community. Also, this is the room that more or less makes Meeting C++ possible, to be more then just a conference. The daily sharing of blog posts, the weekly blog roll etc. is all mostly funded by the conference. So its time to say thank you and present some plans for the future of Meeting C++ and the conference. This session also always ends with a suprise, a well kept secret :)

Since this week I do have the complete set of videos, and now need to setup a complete toolchain to process the raw material (mov) into the published end result. Lots of ffmpeg and other tooling. And I do take some time to figure out how to do it. I hope to publish the first lightning talks around next week. Then the keynotes.

Last year teached myself, that I had to become hungry again. That I'd need to make changes on how Meeting C++ runs internally and that the time had come to start working on the plans that go beyond the conference. So in 2018 I spend a lot of time planning, implementing and building new things, but for now its mostly infrastructure. Roads and bridges that will lead somewhere some day in 2019. Whats already there is the new job section and Meeting C++ recruiting.

Regarding the conference, the most I learned through taking pictures. Seeing my own event through a different lens was really a good experience. One thing I noticed is how the white speaker pults throw of the balance of lights in pictures, as they reflect much of the strong stage lights. Also I learned that only the front and center part of the stage are well lit, and the area next to the projection screen is not flooded with light.

Also the new slide overview page and the form that allows speakers to simply share and upload their slides is a great success. It was always lots of work and manual steps to upload the slides which came per email and then link them on the website. Now this is automated and much faster and easier.